25 days done on our 127 day tour. We’ve taken in a good amount of the east coast of Australia. I would ask where the time has gone but it has passed at a rate that I don’t envy.
After Darwin we flew to Cairns where we spent three days exploring Port Douglas. The weather seemed to be changing so we quickly booked onto a tour of the Great Barrier Reef. We found a company that transported you to the reef by speed boat so we were out there in 20 minutes after an exhilarating ride especially as Tim and I choose seats at the front of the boat to make it extra bumpy for ourselves. We snorkelled around the lower isles. I always find snorkelling quite daunting at the start. You’re out in this massive expanse of water that seems limitless and you’re diving into it. We don our Lycra suits due to the abundance of box jelly fish at this time of year and I go in wondering whether I should have taken a noodle to make myself feel more comfortable. I am quickly distracted by a strikingly blue humphead wrasse. This spurs me on to go hunting for more visual delights. I float around following brightly coloured fish and stopping occasionally to gaze at how the coral sways when caught in a tidal breeze. I found myself at times less than a metre from the coral, this unnerved me, as if I had a fear of being beached on something we had been asked not to disturb. I loved to hold my breath so I could hear the sounds of the fish ripping their food from the coral, once amongst this I heard another sound like someone was knocking rapidly, I turned to my left slightly and saw rain hitting the surface of the water, even this hypnotised me for a few seconds.
Before I knew it I felt chilly and realised our hour and a half was nearly up. I swam back to the boat and noticed two tiny shark-like creatures swimming beneath the boat, this took my breath momentarily as I observed how quick and graceful they were at flitting back and forth.
When returning to the boat I could hear people sharing what they had seen, one lady saw a Manta Ray and Tim saw a Reef Shark. While slightly jealous at these moments I also know I am not ready for these wonders, just yet.


As the weather started to become wetter in Port Douglas we hired a car on our last day and went exploring in the Daintree Rainforest at Mossman Gorge. Although we didn’t spy a lot of nature in the form of birds and insects the variety of trees around the walk were incredible. 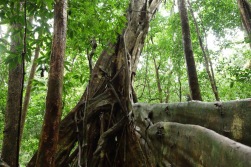 From Port Douglas we went to Cairns for two days. We found an incredible Air Bnb flat for only £17 a night, our own apartment! The people who owned it lived above and couldn’t have gone more out of their way to make our stay comfortable. We toured delicious coffee shops, markets and even did a whiskey tasting with this couple on their balcony on our last night.
We then flew to Brisbane. We were staying with my cousin and her family who have been living out in Australia for a number of years. I also hadn’t seen my cousin properly for about 15 years! As soon as we arrived we felt at home, we had a beer in our hand and were sat down catching up on family like no time had passed. Any worries I had about imposing during this festive season vanished. I had one of my best Christmases ever. We swam in the pool, went out on the river with the boat and just drank and talked for two days. It has certainly made me appreciate and open up to a large family Christmas. When our departure date arrived I didn’t want to go!! 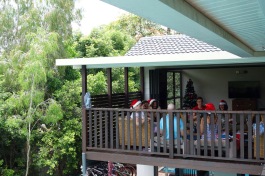 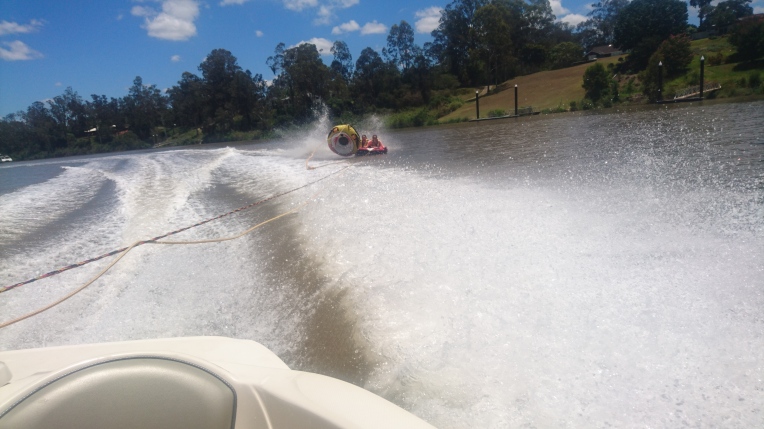 I definitely had the blues on our drive to Byron Bay. These feelings may have affected my experience of Byron as we also arrived with no accommodation booked at possibly the busiest time of year. Surrounded by wannabe hippies, extortionate hotel costs and the realisation we were back on the road with no more home luxuries, the blues hit big time. So we booked a room somewhere chilled and went and sat on the beach to eat the rest of the lamb from the night before, we felt better and started booking the rest of our accommodation down the coast to Sydney.
I wouldn’t say the drive from Brisbane to Sydney is a must do, it’s a long stretch on the Pacific Highway which is like a motorway. We stopped off at some beautiful places to break the drive up; Grafton – a quaint small town where we found a caravan in someone’s garden for the night; South West Rocks – beautiful beaches with stunning blue waters and an incredible lighthouse and Forster which had potentially the best beach in Australia for me – one mile beach. The water was blue, the sand white and we could swim without worrying about jelly fish for the first time since arriving in Australia.

The next day we completed our trip to Sydney, I was unsure if I was ready for a large city after experiencing the chaos of Bangkok but Sydney was beautiful. It seemed to have a combination of the best parts of London for me, the trendy feel of East London with the cleanliness of Canary Wharf and the mix of old and new architecture throw in the heat and everyone has to take their time to prevent over heating.
The transport around Sydney was quick and easy to get to grips with, even the buses moved at a constant rate and was for once my preferred method of transport.
I think if you can do commuting on the tube in London to the point where it becomes normal to sprint for a tube knowing there is another one in literally a minutes time, then start sweating having only just left freezing temperatures at the entrance to the tube to then finding your personal space being invaded by a complete stranger, you can quickly learn to negotiate transport in other cities.
We took in most of the notorious sights; Manly and Byron Beach, the Blue Mountains, also the fireworks off Sydney Bridge on New Years Eve. We stopped for coffee whenever we could as it was just so good everywhere we went and grabbed a beer whenever we felt like it. We were fortunate to stay with a friend of Tim’s in Sydney who lives with her boyfriend. These guys made the stay even more relaxed, we received tips on how to get around and where to go whilst also being made to feel like their flat was also ours for a few days.

I feel like I am physically and mentally, finally, relaxing. That my mind isn’t running at 100 miles an hour with all the tasks that I convince myself that I have to do in order to keep busy, as that’s what makes a life worth living right, always moving. Or so it used to be.
With all the time at airports, travelling, trying not to spend money so that we can make our budget last, these moments have forced me to slow down… Really watch a movie, become absorbed into a book, take as long as I want drinking a coffee. It started out as feeling quite luxurious but I realise that it doesn’t need to be a luxury if you make it a feeling that happens every day as you’re actually achieving more by slowing down and doing your best to really live in that moment and not just try to cram what you think you should be feeling into a few minutes due to a schedule you’ve set yourself on a day when you really don’t need another schedule.

We’re now leaving Australia and on our way to New Zealand where the campervan road trip begins!